I recently came across this article on the BBC website :-
“‘Million’ new homes aim declared by minister Brandon Lewis”

Brilliant news you might think, but on close inspection  Brandon Lewis’s statement is nothing but empty sentiment. Of course he wants to see 1 million homes built – there is a national housing crisis and he is the minister responsible for housing. The true question is how is he going to do it? 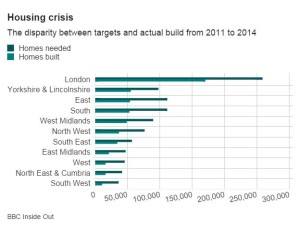 Brandon Lewis has announced that the aim is for these homes to be built by 2020; so we can roughly interpret this as a five year plan. However, the ONS have published data which suggest that the number of households in England is set to grow over the period 2011-2021 by 10%, an increase of 221,000 per year. On the face of it then we will need an additional  1.1million homes over the next five years to keep pace with this prediction. So it would seem that the honourable housing minister’s lofty ambition for England over the 5 year period is, in fact; to build not quite enough houses! Ok so I might be nit-picking a bit about the numbers, but in all seriousness – the fact that a minister feels the need to publically announce the fact – not that we will, but that he would like the country to build not quite enough housing for our needs – should ring alarm bells about how serious the housebuilding shortage is.

The article set me to thinking about how the shortfall in numbers could be met?  I recently attended a conference organised by Larkfleet Homes, where Lord Mathew Taylor espoused the benefits of Garden Villages – a view that contrasts starkly with our national predisposition towards protecting the countryside from development. Lord Taylor openly confronts the unspoken, but very real problem with housebuilding and development. People don’t like it! Inherently so many of our population in this country are uncomfortable with the change that construction and new residents will bring. Everyone wants new houses to be built – it will provide homes for our sons and daughters in the future, it will drive the economy and, on the face of it, it’s all positive. Lord Taylor’s argument is that If housing growth happens “somewhere else” out of sight and out of mind, people will be able to get behind the principal of development.

Those who would argue against Lord Taylor suggest that our towns and cities can provide all of the development space we need in the form of brownfield land.  This camp, epitomised by the Campaign to Protect Rural England (CPRE), argue that there is enough space on our brownfield sites to cater for our housing needs and then some. They suggest that that 35,000 hectares of brownfield land is suitable for housing and have produced a report setting out evidence that there is capacity for up to 1 million homes in England on brownfield sites. Furthermore,  the CPRE argues that this is a sustainable and replenishable source. Their report on the availability of brownfield land makes for an informative read. As with all such reports though, it is highly partisan and although I find myself acknowledging the figures, I feel unsure about the assumptions used to define previously developed land. Again, however, this is me nit-picking and although the land identified in their report may not all be immediately available, it is clear that there is plenty of it  that could, if the circumstances where right, be used for housing.

When I started looking at this, I set out intending to offer something akin to an impartial viewpoint. However, I am having to resist my natural inclination to lean towards Lord Taylors viewpoint.  As a city dweller I am inclined to ask who we are saving the countryside for?  Estimates suggest that 90% of England is essentially rural – some simple maths shows that if the population of England doubled and we built on a further 10% of our rural land there would still be 80% of the English countryside left to enjoy.   I am therefore naturally tempted to view the efforts of organisations like CPRE as a campaign to protect the landed gentry and country brethren from having to share air with us smog monsters!

Our natural landscape in this country is something we should all respect and be proud of – from the shoreline of Northumberland to the heights of the Lake District  it must be treasured and respected. However there is much of it that could be built on without significantly damaging its intrinsic value.  After all, if we did build in rural areas the remaining 80% would be just as accessible to the bulk of inhabitants of the urban towns and cities who we are purportedly protecting it for. I’m pretty sure we could use some of the countryside responsibly and sensitively and still protect the true essence of our English countryside.

So who is right Lord Taylor or the CPRE?

In reality, in as far as I am concerned, they are both right and – equally – they are both wrong. It would appear that we could fuel some, if not all, of our housebuilding needs with brownfield land the CPRE are correct in this regard. However, they give little credence to the quality of housing and townscape that will inevitably result from ever tighter cramping of greater numbers of people into ever smaller boxes. Similarly, Lord Taylor does not really consider the impact of wide scale rural development on the areas  in which it would take place. Despite the relatively rural nature of our landscape, it may be more difficult than  Lord Taylor imagines to find the appropriate space that is in an area served by infrastructure, that is not an area of outstanding natural beauty, that is not endowed with protected species, that is not in the floodplain, that is not subject to coastal erosion and that doesn’t  affect anyone. I would be willing to hazard a guess such places are few and far between. The need for good infrastructure almost guarantees that there will be local inhabitants disturbed by the development. Wholesale construction in our wider landscape could change the English countryside for good and it is this change that concerns CPRE the most.

CPRE have expressed the view that we could meet our demands by continually building on brownfield land and regenerating our cities and they are most probably correct. Lord Taylor has professed the view that Garden Villages are the way forward.  The issue is too personal to be resolved by logic when in reality, it is a question of preference, what is closer to your heart;  the countryside or the people and families that need to make a sacrifice to protect it?